The Naming of Agnes Water

27 Aug The Naming of Agnes Water Example of a Top Sail Schooner

This article has been compiled using various newspaper articles from July 1873 through to Sept 1923. Several points are debatable including the fact that there were 3 ships called Agnes in this area in the late 1800s. The one we reference below, another schooner called Agnes which wrecked around the Capricorn Bunker Group and a steamer which was re-floated in Bundaberg. If you have any information to add to our article please let us know in the comments below, we would love to put the pieces together.

The Naming of Agnes Water

It is alleged that Agnes Water is named after a cargo schooner called Agnes. The Agnes was returning to home port in Brisbane after dropping a delivery off in Mackay.

It left Port Mackay on Sunday 8th June 1873 with an empty cargo hold and an estimated 12 souls on board. We do not know all the names of the people on board however, we are aware of the following: The Captain – Mr Garcia, Mr Garcia’s daughter, Miss Rowlands, Mrs Phillips, Mr David Hume and a Master Brown.

The disappearance was first addressed on 8th July 1873 in Brisbane based newspaper the Queenslander. 30 days after the schooner had left Mackay.  Fears were being entertained respecting the safety of the schooner Agnes as it had not yet arrived in Brisbane.

The family friends and stake holders of the Agnes approached the Hon. A. H. Palmer (the premier of Queensland), urging him to despatch government owned steamer Kate to search for the missing vessel.

With the lack of information regarding the whereabouts of the Agnes, Mr Palmer conceived that it would be useless to send the steamer on what would to all intense and purposes be a “wild goose chase”

“but Mr. Palmer did not see the case as represented, and nothing came of the effort. The Kate will therefore be available for select Sunday fishing excursions as usual.”

The public response to the use of a government vessel for leisure instead sent on a search for the Agnes started quite a rile. Read more here

All vessels were ordered to keep a look out while travelling the coast. However only two made a proper search. Captain Burrows of the Wave of Life conducted  a thorough search of the Percy Islands South of Mackay. Schooner Naomi also made an unsuccessful search of the Capricorn Bunker group. 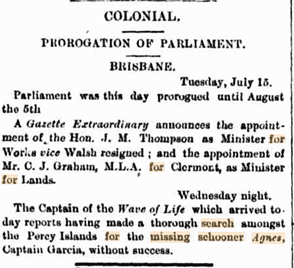 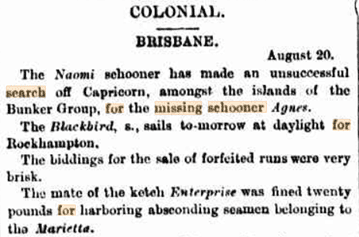 The best lead came from Bustard Head Lightstation. Reported by the Rockhampton Bulletin. Head lightkeeper, Thomas Rooksby, shared information that Captain Garcia and another passenger, Sir David Hume, had joined him for tea at the Lightstation. As the Agnes was sheltering from rough seas in Pancake creek between  13th – 15th  June. It left on 16th June after taking on extra ballasts.

It’s assumed that assistant lightkeeper at the time, Mr Nils Gibson, watched the Agnes pass Round Hill Head. With blowing NE winds and heavy rain falling. This was the last time the Agnes was seen. Sir Thomas Rooksby. Head light-keeper at Bustard Head from 1868 – 1902. Pictured next to a time keeping device he invented during his time at Bustard Head.

With this new information from the lightstation and the following recommendation made on  2nd August 1873 from master mariner Sir William Collin:

“I, as an old aud experienced mariner having some knowledge of the coast, beg to offer a suggestion which, if acted upon, will, I am sure, clear up all doubts and allay the painful anxiety which is being felt by the friends of the passengers on board. I feel confident that if a thorough search were made along the beach from the Burnett River to Round Hill Head some trace of the missing schooner in the shape of boat’s oar, gear, or something floatable would be found, indicating the fate of the vessel. My humble opinion is that when Captain Garcia left Bustard Head on the 16th ultimo, the wind increasing to a gale from E.N.E. to E.S.E., with very dirty weather, would bring the west bight of Hervey’s Bay, the beach I have alluded to, a dead lee shore to  The schooner; and in trying to keep off, with press of sail, an accident might have here occurred the traces of which probably still exists. This coast should at once, without further loss of time, be thoroughly examined.” It was once again urged that the steamer Kate be sent to search for the Agnes. Once again it was denied. Even if you are not a master mariner this advice from Sir William Collin is obviously common sense that should have initiated a government search of the most probable area.

Instead a reply, printed on  5th August 1873, in The Brisbane Courier, stated that the Kate was not sent as a Sydney base steamer called the Queenslander was sent to search instead. However the reporters investigation came up with no evidence that such a search ever occurred.

Was There Another Sighting?

Almost 3 months later this article appeared. It turns out the Agnes was sighted once more after leaving Bustard Head.  See article below. Over the next year various articles were printed in Newspapers from Mackay down to Brisbane, all eventually fading into nothing.

A slight resurgence of the story about the Agnes was presented in the Daily Mercury Mackay in 1912. Brought up due discussing the fate of Mr Hume, at this point we imagine him to be of some importance to be written about almost 40 years later. The most interesting thing we get here, is in the article below from the Daily Mercury, Mackay 7th October 1912. 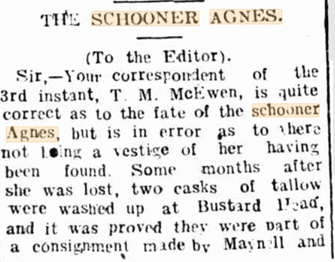 We find this interesting as there were no reports that we can find regarding tallow being washed up at Bustard Head. There was also no record of the vessel carrying a cargo load.

Additionally a few months after the disappearance of Agnes, a ship wrecked near Hervey Bay with a load of rum. The cargo being considered so precious that a search and recovery mission was instantly ordered. We feel if the Agnes had such cargo onboard it would’ve received the same attention also the considerable ballasts taken in at Pancake Creek more than likely would not have been necessary if it was carrying a load at the time. The last article we share is from the Rockhampton Bulletin 14th September 1923.

Here it is descried by a resident from Rosedale. How the family men of a local cattle station went in search of missing cattle towards the coast. While in search they found a deeply carved tree with the word ‘Agnes’ and a year (in this article it’s mentioned as 1864, we are assuming a misinterpretation or misprint).

After conversing with Thomas Rooksby at Bustard Head they understood that the Agnes was a ship that went missing some 4 years before hand. They were told of a heavy squall at the time and deduced that this tree was inscribed by at least one survivor of the ill-fated Agnes.

Still no survivors or the wreckage was ever found.

In 1878 a residence was built in the area and named it Agnes Water in memory of the lost schooner and its passengers.