Posted at 12:37h in Things to do, Wildlife by LARC team 0 Comments
0 Likes

For almost 2 months Black Noddy Terns have been found washed up on local shorelines, mostly deceased others terribly exhausted.

It is normal for the passing of some of these birds every year within the Capricorn Cays, continuing their strange life cycle and symbiotic relationship with the Pisonia Grandis trees. However, this year we have become quite concerned as there is an uncommonly large number of dead Noddies being found on the islands and even more strange… hundreds found along the mainland coast. 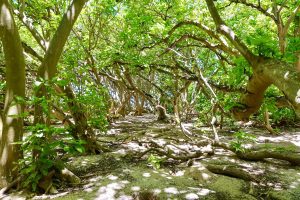 Recently we had a meeting with our friends from Queensland Parks and Wildlife who managed to fill us in. They had collected birds from several locations and sent them to a lab in Brisbane to get answers.

The birds were tested for a variety of diseases, and screened for contaminants all of which came back negative.

The main thing noted in the report was that all of the birds had very little, to no food in their stomachs and were severely underweight. The conclusion being that they died of exhaustion and starvation.

A similar event like this happened about 10 years ago. Taking a break between fishing. Image Courtesy of Reef Connect

Diving in a bit deeper this can be related to the current weather event – La Nina. Coincidentally the last La Nina was 2010-2012, aligns with the last notable Noddy death event.

So, what is La Nina doing?

The enhanced trade winds also cause warmer surface waters to the north of Australia, potentially leading to heavier rainfall and more tropical cyclones than average.” What does that mean for the Noddies?

Black Noddy Terns solely survive off a diet of small bait fish. The birds themselves are unable to dive deep in the water. The fish they are eating are in shallow waters, or on the surface. A warmer surface temperature caused by La Nina pulls small fish deeper into the water column, out of reach of the un-diving Noddies.

In this case the terns then must rely on bigger fish like tuna pushing the baitfish to the surface. If there is a lack of the game fish around the Capricorn Cays, then the Noddies have little chance of finding food there.

In addition, a change of the currents can also pull the bait fish away from their known feeding grounds within the Capricorn Bunker Group. The terns then have to travel further to try and discover new fishing spots. Our LARC crew have noticed several flocks of Noddies fishing along the coastline of Eurimbula National Park. That is 60 kms away from their nesting grounds! Black Noddy Terns and chicks amongst the Pisonia Grandis Trees.

If the Noddies are unsuccessful in their mission for food, how long will they survive?

On a positive note. While it is hard to watch, this has happened before, and the noddy numbers did return. Our LARC crew hope this will be the case once again and will continue to observe and stay in touch with the authorities / our friends at QPWS as every creature is key to the ecosystem.

Please note: We are not scientists and have written this as our interpretation of the report, to try and make it easier for more people to understand. If you are interested to find out more contact your local National Parks and Wildlife Services representatives.