We often get asked why our large, robust and beefy LARCs are painted pink? It’s such a good question. I had no idea. So I went on a mission to find out –  ‘why the pink?’

Whenever I want to know something about the LARCs, I instantly turn to Macka our Head Skipper. He’s always around, and super happy to answer any and every question. He’s been LARCing for around 7 years. I was confident he would know the answer.

Me: I keep getting asked why the LARCs are Pink. And I don’t know what to say. Do you know why they are pink?

Macka: I am not 100% sure, but my theory is that the pink attracts the dolphins. I have skippered many different boats but in none of them have I ever had as many close interactions with the dolphins quite like on the pink LARCs.

Not what I was expecting, however it could be true. But how would you know if the pink attracts dolphins before painting it pink. Surely it cannot be the actual reason. 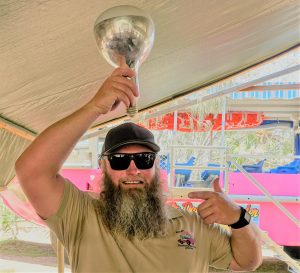 The next person I just happened to see this day was Kev. He is newest member to the LARCy family, I didn’t really expect him to know the answer. But if you have met this local celebrity, you know he’s always up for a good yarn. I was interested to hear his thoughts.

Kev: At a guess Jess.. ha-ha that rhymes. I reckon the colour was chosen as a safety precaution. Touring around such a remote area, in an emergency we would be easy to spot by air. I also know the LARCs have been used for all different types of rescues, it would be reassuring to see the pink LARC coming along the beach. You would recognise it from miles away. That has got to be a good thing.

Thank for your input Kev I like this idea. Still not convinced.

Every day that I rock up at work, there is already someone at work before me and they have probably been there for 2 hours already. Our trusty LARChanics – they keep our 55 year old machines running smoothly. Every day they come in super early before our daily tours depart to run prestart checks and conduct general maintenance. These guys are the ones who redo the paint when the LARCs need a paint job. Maybe they know…..

LARChanics: We are pretty sure this paint was the one on special at the shop.

You know what, this could be possible. I guess if the price is right does the colour matter? 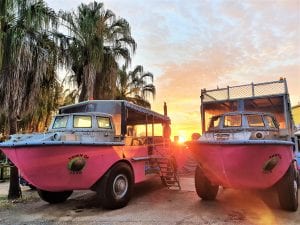 I am lucky enough to spend 2 days a week with our LARCeting Manager – Amber. This legend lives and breaths LARCs. She is a big pink supporter. I have never met anyone who is so keen to make sure her nails, lipstick and earrings are on-brand pink.

She’s got to know the pink in this story.

Amber: Obviously the pink is so we stand out in the crowd. It is so memorable. Very smart marketing ploy. We know there’s other LARCs out there, but can you remember where they are or what colour they are? No of course not, because they are boring and normal. We are original and interesting. Definitely a well thought out choice for the business.

I really did think to myself after this conversation that this theory is quite plausible. And definitely more so than the rest. With so many different opinions on the shelf. I knew there was only 1 thing left to do, go straight to the source……. it’s time to see the boss!

If anyone would know, obviously it would be the boss. LARCman Neil started 1770 LARC! Tours in 1994 with his father. As a highly active business owner, Neil takes on all sorts of roles within the company from LARchanics to skippering. He treats each day as if it’s his first, with so much contagious enthusiasm. Lately he has been working on some secret projects at the maintenance block, so he was a little difficult to catch. But it happened and this is how the conversation went:

Me: “So boss man why are the LARCs painted as they are?”

Neil: “Well Jess, our trading name is 1770 Environmental Tours, and I wanted our vessels to reflect our environmental views and how we want to be a part of the scenery around us. So the colour was purely chosen because it blends in with the environment.”

I pulled a silent questionable face and walked away confused and disappointed. That clearly did not go as planned. I have really hit a brick wall now. If anyone is straight laced it’s our office manager Lee. She’s the mum and carer in the team. I knew that I was going to get a no frills straight up answer here.

Me: “I need to know why the LARCs are pink and, well, I asked the boss but I don’t think he is feeling very well. He gave a strange answer.”

Lee: “Ok, interesting what did he say?”

Me: “He said the LARCs are pink to blend in with the environment”

Lee: “No he’s right! They chose that colour thinking that the LARCs would disappear into our surrounds. The catch is, he’s colour blind! ….. the LARCs to him are actually green not pink. We thought it was funny and never told him. 27 years later it’s still the best inside joke.”

And it’s not. I did eventually find out the truth and it’s definitely not what I was expecting at all. If you really want to know the story behind the pink LARCs wellllllll you better book onto a LARC tour to find out.”